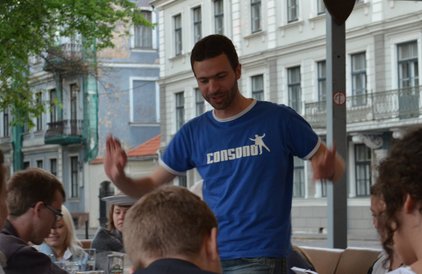 I have been conducting choirs since 2011, when a long period of intense watching gave way for active performances. The autodidactic learning had started long time earlier but from the moment of my first conducting project, it has accelerated continuously in intensity and depth. Training conducting means often practicing a musical art without access to an instrument or other musicians. To do it anyway requires some craziness and the pleasure to try out new approaches. The determination and focus of this long-term project has become an enormous enrichment of my life. Today I feel priviledged to have found a place where my passion for conducting can make a contribution beyond music and where I am free to shape projects and choir concerts in entirely new ways, emerged in a group of wonderful, creative people.  A warm thank you to all of you who have supported me along the way and who still do.

In fall 2021, I will start working on a program focussing on truth and where our light comes from. We shall present it on multiple sites, if covid rules allow. More details here:

Interested in regular updates about our concert dates for nordic music? Sign up for our newsletter via konzerte(å)silenceplea.se

Some, information, thoughts and media from former projects and performances can be found  here.

A program of nordic sacred music focussing on hope and the energy of life.

Under covid-conditions we sang this concert in quartets at multiple sites around and inside Heilig-Geist-Kirche.

2020-04 >2020-06 anima nordica concert project "sammanhang - Zusammenhänge" - A program showcasing the works of modern swedish lyricists on the interconnection between human fate, our planet earth and the heavens.

Concert behind in Heilig-Geist Kirche due to Covid-19 pandemics. We even contributed to church services in Betlehemkirche Tolkewitz and Svenska Viktoria Församling, Berlin. In memory of the 75 year jubilee of the end of WWII on 8th may, we recorded a video.

Three concerts in Dresden at Heilig-Geist-Kirche, Schlosspark Pillnitz during the cultural festival "Elbhangfest" and together with "dresden jazz trio" at venue "Ecke Nord".

Enthusiastic audience again in our three concerts in Dresden at Heilig-Geist-Kirche, Christuskirche Strehlen and Betlehemkirche Tolkewitz. We collected >2000 Euro for charity.

We ended up as a group of singers with 7 nationalities who performed a 1-hour a-cappella  program in 9 languages. We had our concerts at Heilig-Geist-Kirche Blasewitz and Himmelfahrtskirche Leuben for 700 enthusiastic listeners and collected more than 3000 Euro for charity. This was so much fun that this project will be continued. Stay tuned...

I only organized this concert. Conducted only one piece in the performance for fun.

Directing 1 piece as my farewell to the choir.

As a part of my thesis work, I did video studies of other conductors to analyze what I could learn from imitating their conducting movements. The answer: A gorgeous lot! It was enlightening but much harder than what I could imagine. One fun result of this work is the following > video  (P. S.: My conducting is done from memory and without visual guidance)

Program "P4 Förmiddag" with Hasse Andersson. We performed 5 songs live and got interviewed about the music.

Program "Radiohuset" with Hasse Andersson. We performed 4 songs live and got interviewed about the choir and the upcoming christmas concerts.

One week on the topics "less is more" and "which conducting cues are really necessary"?